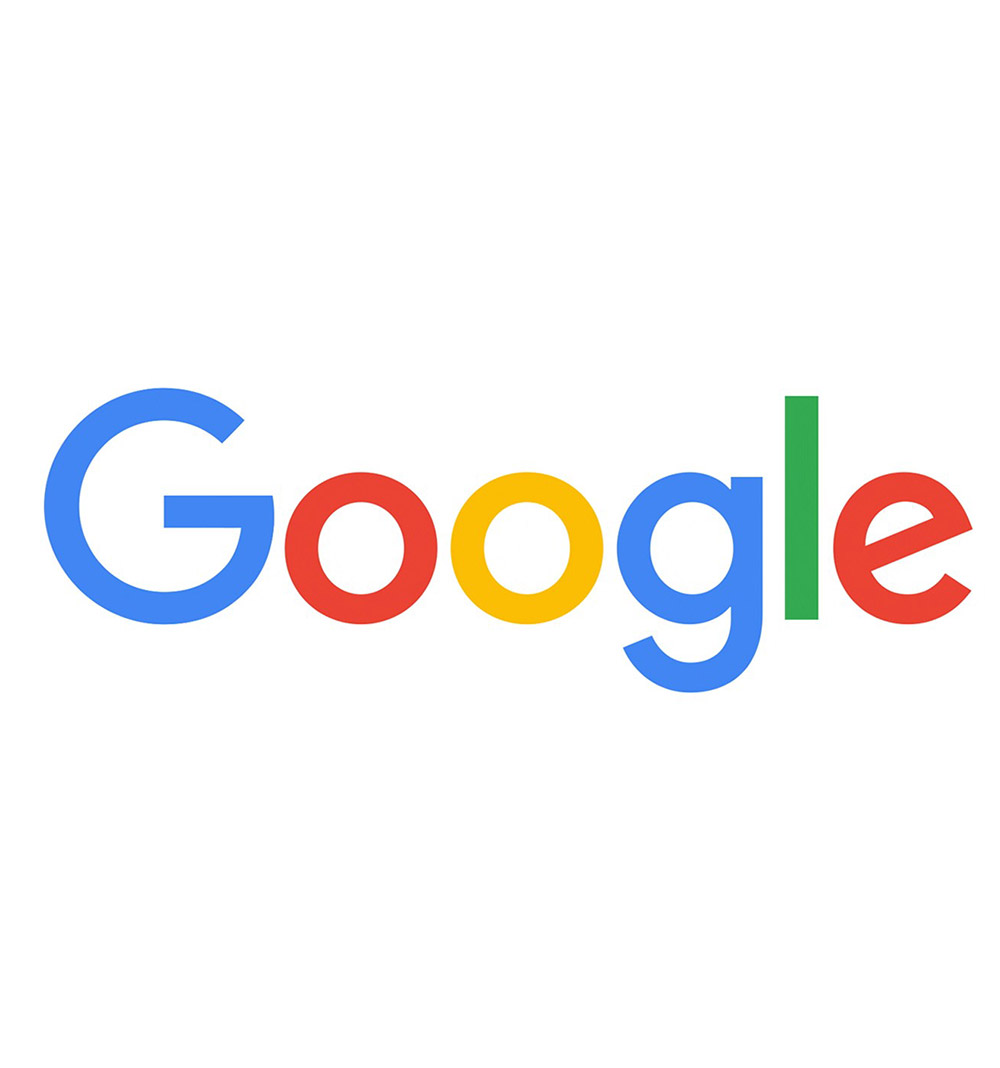 Google has since removed the ban on addiction treatment advertising, so that’s definitely good news.  Google eventually moved to a process of vetting treatment centers, as we recommended.  They partnered with LegitScript (ugh) in order to certify treatment centers and that has resulted in its own, separate set of issues.  I’m not going to get into it here, but I plan on writing a blog about the timeline of addiction treatment on Google and what went wrong.  I think the biggest takeaway here is transparency and process; two areas where Google constantly disappoints.  More to come on that later, thanks for checking back in!

In what can only be described as a failed PR stunt, Google recently stopped showing ads for addiction treatment searches.  With complete disregard for the people (and businesses) to be impacted, Google framed the decision as a move of compassion and concern in the face of the growing opioid crisis.  Sounds great, right?  Well, it is great… great for the pharmaceutical industry, as Google still allows them to advertise.

You heard that right – Google’s attempt to slow the opioid crisis consists of shutting down addiction treatment advertising while continuing to show ads for pharmaceutical companies.  Should we speculate that this had anything to do with the relative size of each industry?  It’s hard not to notice that big pharma is an estimated $610 billion industry while addiction treatment is a mere $35 billion.  Initially, Google was lauded for their decision, as reports were quick to point out the billions of dollars they were leaving on the table.  However, when you consider that Google likely makes 15-20 times as much money on big pharma (estimating by industry size) … they suddenly don’t look so compassionate.

Let’s take a look at some real-world examples.  Here’s a screenshot this morning (10/11) after searching for “oxycodone.”

When you search “oxycodone” the top result is a PAID advertisement for oxycodone.

So what happens when you search “oxycodone addiction treatment?” 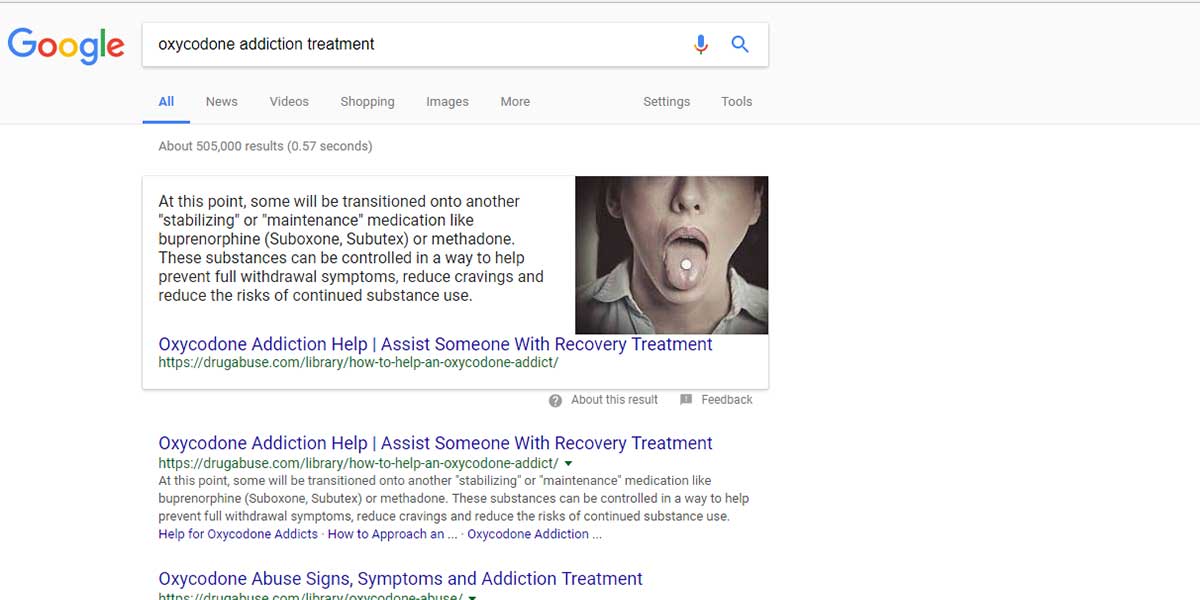 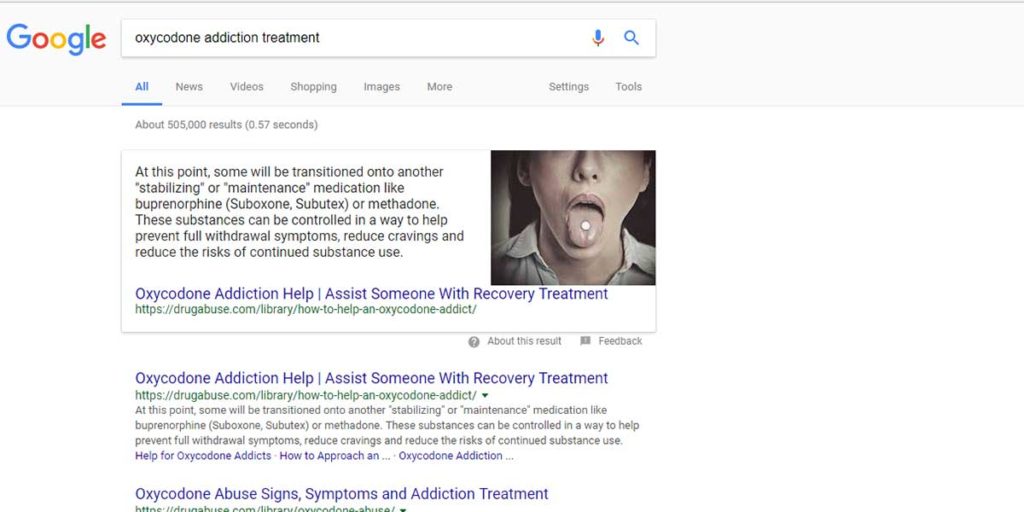 No local results, no ads, none of the details or additional information we saw when just searching “oxycodone.”

In Google’s defense, there was an issue with advertising in the addiction treatment industry.  Addiction treatment advertising had gotten out of control and addicts were being brokered like a commodity.  The problem is fly-by-night rehabs and call centers, looking to make a quick buck referring addicts elsewhere.  A generally despicable practice, but common nonetheless, these companies would use false advertising to generate leads and then sell them to the highest bidder.  To compound the issue and illustrate the folly of Google’s effort, consider where all of the search traffic is now going: to the top organic search results – which are predominantly owned by large call centers that have no legitimate facilities.  Google has effectively cut off traffic to the thousands of credible centers around the country and funneled all of those clicks to the very evil they set out to combat. /sigh

I digress, as the issue is therefore not *why* Google chose to do something but instead *what* they chose to do.  Google never considered the millions of people and thousands of legitimate small businesses that this decision would impact.  It is especially frustrating that Google still shows ads for big pharma, but (again) in their defense they do regulate that industry.  In order to show ads for any pharmaceutical-related term, a company has to appear on the SAMHSA website and jump through a few hoops for Google.  Basically, there is a vetting process to ensure you are allowed to be selling pharmaceuticals.

Which then begs the question: Why wasn’t a similar system implemented on the addiction treatment side?  Is it because big pharma’s pockets are deep enough to make an exception, but addiction treatments aren’t?  These are all questions we’ve asked Google directly, via our agency rep and Google’s support, but unfortunately, Google doesn’t seem to care.  We’ve reached out multiple times through multiple channels and Google has yet to offer any responses; let alone any understanding or concern for all the businesses – and people – they’re hurting.  It’s sad when a once-great company like Google gets so big they forget about all of the little people they may be impacting.

As a company that specializes in addiction treatment, Full Circle SEM only works with licensed rehab facilities carrying accreditations from organizations such as CARF, NAATP and The Joint Commission.  As such, we are understandably biased against Google’s decision but have done our best to highlight the issue here using facts from both sides of the argument.

If you or a loved one are having trouble finding an addiction treatment facility due to Google’s decision, please feel free to contact us at your convenience.  We can help you find a reputable, accredited facility that fits your needs, as a free, unbiased service where we receive no incentives from the admitting treatment center.